In 1974 Emil Peters, a Kansas livestock farmer, was concerned when his small community of Linn, Ks was losing jobs and population. He knew that if something wasn’t done there would eventually be nothing left of his rural hometown.

Emil believed small towns were a great place to raise a family and he enjoyed the down to earth people that lived in them. Most rural communities were losing their younger generations to opportunities in bigger cities. Emil realized the need to create jobs in his small town.

Linn Post & Pipe Supply was created to support the needs of the local farmers and ranchers, but also as an avenue to create jobs for the community.  Not long after his pipe business got started Emil came up with a new idea, continuous fencing.  This patented product changed the way livestock fencing would be done forever and began the rapid growth of his company. Soon Linn Post & Pipe Supply started adding good-paying jobs to keep up with the demand for continuous fencing that was coming in from all over the country.

Emil’s willingness to custom build fencing, gates, and facilities that meet customer’s needs led him to a lot of successful projects.  Emil always enjoyed meeting customers. One of his favorite things to do was to take customers to the local café next door for homemade pie and coffee.

The product line expanded beyond pipe, cattle fencing and gates. Adjustable working alleys, crowding tubs, bale feeders and all types of portable cattle equipment were added.  Due to the expanded product line, the original 40’x 42’ building just wasn’t big enough.  Emil wanted to expand his growing business to accommodate farmers and ranchers in the northern United States and grow in another small rural community.

Creighton Nebraska became the home of a complete sales and manufacturing facility.  In 1979, the Nebraska Division of Linn Post & Pipe Supply opened for business. The original building has now grown into 5 buildings totaling more than 69,000 square feet. Richard Stubben has managed the Nebraska location since the first day it opened and is local to Creighton.  The two locations in Kansas and Nebraska employ about 50 people.

During this growth, Emil’s children, Bruce, Mike, and Deb, learned the business and joined him in managing various aspects of the operation.     Eventually, the 3rd generation of family members took the reins.  Emil’s grandson, Kyle Peters, continues to carry on the tradition of building high quality, reasonably priced livestock equipment for farmers and ranchers.

The quality and craftsmanship of the products produced by Linn Post & Pipe Supply are a direct result of the dedicated, local labor force in these hard-working Midwestern communities.  Many members of the team are farmers and ranchers themselves. 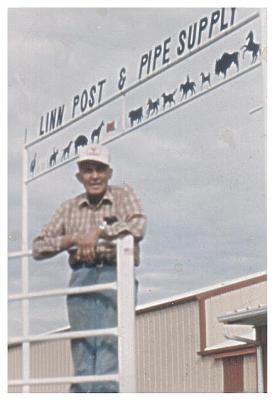 Emil’s passion for his faith, family, and the community was something that those around him observed daily. It is the blueprint for how his company has and always will do business.  Linn Post & Pipe Supply makes some of the finest livestock equipment in the world for some of the finest people in the world. Emil’s original founding vision in 1974 is why we do it.

We appreciate each and every one of you that has contributed to keeping Linn Post & Pipe Supply’s mission going strong for nearly 50 years.