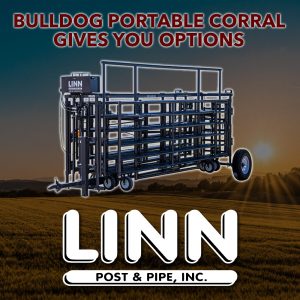 Features of the Bulldog

The Bulldog Portable Corral features the same easy-to-use hydraulic lift system as the Wrangler Portable Corrals, but in a smaller, towable package. The hydraulic lift system raises and lowers the corral with ease. This eliminates the need for you to lift panels, wind cables, or crank jacks to put the system in place. The corral has three size options, is easy to fold out, and weighs a total of 3300 pounds. It comes with nine panels, each of them fourteen feet long, and the main frame is sixteen feet long. For ease of moving, the corral is set on solid panel tires and also uses a solar battery charge.

The large bow gate creates the perfect two-pen setup. This makes catching, sorting and loading out cattle easier whether in the pasture or on stalks. The corral also features a removable tongue hitch as well as the ability to haul portable panels of your own. These options result in an endless number of quick-and-easy pen setups that can be customized for every situation.

How the Bulldog Can Be Used

The Bulldog Portable Corral can hold up to sixty head of cattle. But like the Wrangler Corrals, the Bulldog can add panels to make gathering larger numbers of cattle easier. Because there’s the option of adding several different styles of head gates and optional alley gates, it has endless possibilities. Headgate options make this corral more versatile than the competition. This corral can also serve as a portable calving pen or a working pen to doctor animals. It’s built tough to provide you with many years of reliable service. Ultimately, the Bulldog Portable Corral can save you time and save stress on your animals. Providing quality resources to save you time and energy has been the mission of Linn Post & Pipe Supply since 1974.